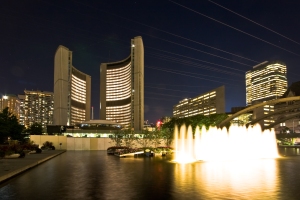 A few years ago, I took the train from Ottawa to Toronto. For whatever reason, I became transfixed at this portrait of Toronto’s city hall mounted to the front of the passenger car. I started at it for a minute or so and then suddenly saw why I have become fascinated by it: the very architecture of Toronto’s city hall so perfectly represents Toronto and Torontonians.

So, what is Toronto’s city hall? This building is open only to itself, whose large windows face only the other tower so that the city hall can marvel upon itself and become enthralled with itself, and it remains completely closed off to the rest of the world, to which it presents a brutalist, expressionless concrete wall — as if the rest of the world were unimportant because Toronto is the center of the universe.

That is why Toronto’s city hall so perfectly represents Toronto and the attitudes of Torontonians. Furthermore, I imagine that anyone who is not from Toronto will find this post funny, while Torontonians themselves would at first instinctively recoil in disgust and then find me obnoxious and petty for having made this observation.

My area of academic expertise lies in Canadian political institutions, especially the Crown, political executive, and conventions of Responsible Government; since 2011, I have made a valuable contribution to the scholarship by having been published and cited extensively in my field. I’m also a contributing editor to the Dorchester Review and a member of the editorial board of the Journal of Parliamentary and Political Law.
View all posts by J.W.J. Bowden →
This entry was posted in Humour & Satire. Bookmark the permalink.