Some Thoughts on Censorship 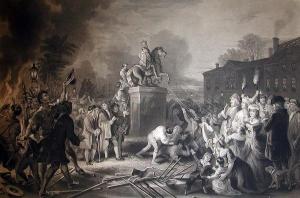 Tearing down the statue of George III destroyed monarchy as a form of government everywhere, the world over.

Two years ago, I posted a photo of a coffee mug that bore a text with whose premise I disagree. I found it humourous, but I disagreed with it. I suppose that an activist type might claim to have been “offended” or “triggered” by it. One of my acquaintances reacted in a way that I found odd and surprising: this person suggested that I should have destroyed the mug. First, it was not mine, so destroying someone else’s property at the office probably would not have gone over well. Second, destroying something simply because it symbolizes something with which I disagree would be incredibly puerile, infantile, emotive, and stupid. It would also accomplish nothing. Third, I then came to suspect that this person believed that destroying the object would somehow destroy the idea itself.

I watched an interview with Stephen Fry, and the disjointed thought that first occurred to me in amorphous form finally turned into something more concrete, like how a super-cooled liquid will solidify instantly around a solid object introduced to its environment.

Fry adds at 8:03: “But to remove his statute strikes me as being stupid. The way to fight colonialism, and the ideas behind it, is not to pull down statues. It is actually to reveal, to say who he is, ‘This is who this man was: look at him.'” In other words, if you disagree with colonialism, then you should explain why in a rational argument instead of tearing down a statue of someone who represents colonialism.

Censorship is based on the primitive and infantile belief that destroying an object which represents an idea (like a book or any other written thing bearing the text of an argument, or a statue or idol or other non-textual visual symbol) somehow thereby also destroys the idea itself. Censorship therefore signifies a triumph of primitive, infantile, emotive volatility over reason and rational argument.

What I’m describing here has been identified by psychologists and evolutionary biologists as a primitive form of cognitive bias, sometimes known as “Appearance Equals Reality.” The object that propagates or represents an idea that one hates becomes the idea that one hates. Therefore, destroying the object will destroy the idea. Since it is a cognitive bias, it is, by definition, irrational and instinctive.

I would therefore posit that impetus which some activists demonstrate in their desire to ban and censor certain material that either expresses (as in writings) or represents (as in a statue of Cecil Rhodes at Oxford University) ideas with which they disagree or find “triggering” or “offensive” ultimately stems from this primitive cognitive bias of “Appearance Equals Reality.” Subconsciously, they believe that destroying or banning something which propagates or represents an idea will destroy the idea itself and thereby prevent them from having to reckon with or deal with that idea, and prevent others from ever independently coming up with the same or a similar idea in the future. This cognitive bias is sentimental and infantile, because acting out on this instinct allows someone to throw a tantrum and destroy or burn something instead of engaging with the material and devising a reasonable argument on why the ideas contained or implied therein are bad and ought to be rejected.

Censors are, above all, barbarians. Like the Huns and Visigoths who plundered cities in the Roman Empire, they would sack the city of knowledge, set it ablaze, and raze it into the dust instead of contributing their own ideas to refute existing ones.

My area of academic expertise lies in Canadian political institutions, especially the Crown, political executive, and conventions of Responsible Government; since 2011, I have made a valuable contribution to the scholarship by having been published and cited extensively in my field. I’m also a contributing editor to the Dorchester Review and a member of the editorial board of the Journal of Parliamentary and Political Law.
View all posts by J.W.J. Bowden →
This entry was posted in Random Thoughts. Bookmark the permalink.

3 Responses to Some Thoughts on Censorship