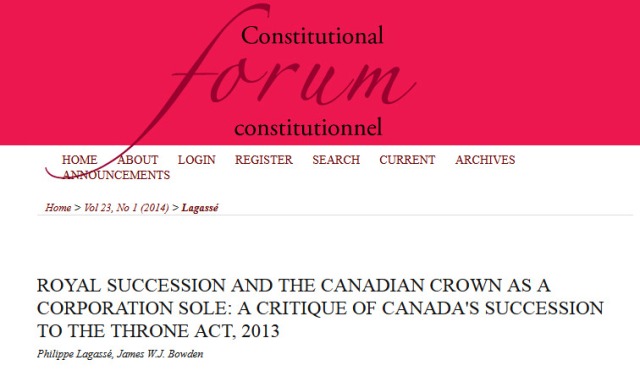 Philippe Lagassé and I have written a short article on the Crown of Canada as a corporation sole and how this fundamental attribute of the Crown pertains to royal succession and section 41(a) of the Constitution Act, 1982.

I’d like to thank Patricia Paradis of Constitutional Forum for having published our article, which you can read at the link below.

My area of academic expertise lies in Canadian political institutions, especially the Crown, political executive, and conventions of Responsible Government; since 2011, I have made a valuable contribution to the scholarship by having been published and cited extensively in my field. I’m also a contributing editor to the Dorchester Review and a member of the editorial board of the Journal of Parliamentary and Political Law.
View all posts by J.W.J. Bowden →
This entry was posted in Corporation Sole, Crown (Powers and Office), Succession (Sovereign). Bookmark the permalink.