My Column in the Ottawa Citizen: Why the Harper Government’s Succession Bill Is Unconstitutional 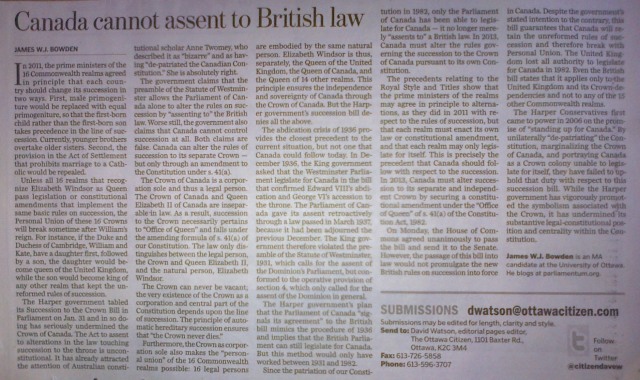 I thank David Watson and the editorial staff at the Ottawa Citizen for having publishing my column!

In 2011, the prime ministers of the 16 Commonwealth Realms agreed in principle that each country should change its succession in two ways. First, male primogeniture would be replaced with equal primogeniture, so that the first-born child rather than the first-born son takes precedence in the line of succession. Second, the provision in the Act of Settlement that prohibits marriage to a Catholic would be repealed. However, the statutory requirement that the Sovereign be a Protestant would remain intact.

Unless all 16 realms that recognize Elizabeth Windsor as Queen pass legislation or constitutional amendments that implement the same basic rules on succession, the Personal Union of these 16 Crowns will break sometime after William’s reign. For instance, if the Duke and Duchess of Cambridge have a daughter first, followed by a son, the older daughter would become Queen of the United Kingdom, while the younger son would become king of any other realm that kept the unreformed rules of succession.

The Harper government tabled its Succession to the Crown Bill in Parliament on Jan. 31 and in so doing has seriously undermined the Crown of Canada. The Act to assent to alterations in the law touching succession to the throne is unconstitutional. It has already attracted the attention of Australian constitutional scholar Anne Twomey, who described it as “bizarre” and as having “de-patriated the Canadian Constitution.”

The Crown of Canada is a corporation sole and thus a legal person. The Crown of Canada and Queen Elizabeth II of Canada are inseparable in law. The law only distinguishes between the legal person, the Crown and Queen Elizabeth II, and the natural person, Elizabeth Windsor. As a result, succession to the Crown necessarily pertains to “Office of Queen” and falls under the amending formula of s.41(a) of our Constitution. The Crown can never be vacant and “disembodied”. The Crown as a corporation and central part of the Constitution depends upon the chain of persons who succeed to the office, known as the line of succession. The principle of automatic hereditary succession ensures that “the Crown never dies.” Instead, the Crown only “demises” from the Sovereign to his or her successor, as prescribed by law. (Historically, the Crown has demised by conquest, and once, in 1936, by abdication as prescribed by law).

The Crown as corporation sole also makes the “Personal Union” of the 16 Commonwealth Realms possible: 16 legal persons are embodied by the same natural person. Elizabeth Windsor is thus, separately, the Queen of the United Kingdom, the Queen of Canada, and the Queen of 14 other Realms. This principle ensures the independence and sovereignty of Canada through the Crown of Canada. But the Harper government’s succession bill denies all the above.

The Abdication Crisis of 1936 provides the closest precedent to the current situation, but not one that Canada could follow today. In December 1936, the King government asked that the Westminster Parliament legislate for Canada in the bill that confirmed Edward VIII’s abdication and George VI’s accession to the throne. The Parliament of Canada gave its assent retroactively through a law passed in March 1937. The King government therefore violated the preamble of the Statute of Westminster, which calls for the assent of the Dominion’s Parliament, but conformed to the operative provision of section 4, which only called for the assent of the Dominion in general.

In 1953, each Realm legislated only for itself on alterations to the Royal Style and Titles. Canada could have requested that the UK Parliament invoke the Statute of Westminster and legislate for Canada, but instead asserted its own sovereignty and independence. The prime ministers of the Realms had agreed in principle on altering the Royal Style and Titles, as they did in 2011 on the rules of succession, but each Realm enacted its own laws and legislated for itself. We need to build on this precedent in 2013.

The Harper government’s plan that the Parliament of Canada “assent to” to the British bill mimics the procedure of 1936 and implies that the British parliament can still legislate for Canada. But this method would only have worked between 1931 and 1982 – and wasn’t even used in 1953. The Patriation of our Constitution in 1982 abolished all the British Parliament’s residual authority to legislate for Canada. Even the British bill states that it applies only to the United Kingdom and its Crown dependencies and not to any of the 15 other Commonwealth Realms. In 2013, Canada must alter succession to its separate and independent Crown by securing a constitutional amendment under the “Office of Queen” of s.41(a) of the Constitution Act, 1982.

On Monday, the House of Commons agreed unanimously to pass the bill and send it to the Senate. However, the passage of this bill into law would not promulgate the new British rules on succession into force in Canada. Ironically, this bill now guarantees that Canada will retain the unreformed rules of succession and therefore break with the Personal Union.

The Harper Conservatives first came to power in 2006 on the promise of “standing up for Canada.” By unilaterally “de-patriating” the Constitution, marginalizing the Crown of Canada, and portraying Canada as a Crown colony unable to legislate for itself, they have failed to uphold that duty with respect to this succession bill. While the Harper government has vigorously promoted the symbolism associated with the Crown, it has undermined its substantive legal-constitutional position and centrality within the Constitution.

James W.J. Bowden is an MA candidate at the University of Ottawa.

*I had made some minor changes which the Ottawa Citizen unfortunately couldn’t include due to limitations of space and my tardiness! I am very grateful to David Watson and the editorial staff for having given me the opportunity to express contrary arguments on the succession bill.

I will also post the full legal-constitutional case against the Harper Government’s succession bill later this week.

My area of academic expertise lies in Canadian political institutions, especially the Crown, political executive, and conventions of Responsible Government; since 2011, I have made a valuable contribution to the scholarship by having been published and cited extensively in my field. I’m also a contributing editor to the Dorchester Review and a member of the editorial board of the Journal of Parliamentary and Political Law.
View all posts by J.W.J. Bowden →
This entry was posted in Corporation Sole, Crown (Powers and Office), Succession (Sovereign). Bookmark the permalink.

10 Responses to My Column in the Ottawa Citizen: Why the Harper Government’s Succession Bill Is Unconstitutional