A Parliamentarist’s Christmas: The Christian Origins of the Westminster System

The Parliament of Canada

The Centre Block of Parliament Hill stands out as one of the most impressive examples of neo-Gothic architecture in Canada. While attending a presentation there earlier this year, I walked along the Rotunda and admired the ornate grandeur and vivid detail of the masonry and continued into the Hall of Honour, which leads to the Library of Parliament. The elegant vaulted ceilings of the Hall of Honour resemble old Medieval cathedrals; as I gazed up transfixed by the beauty of the arches and keystones, I considered the entire structure “hallowed ground”. 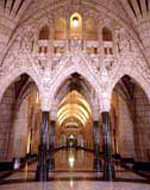 Parliament as an institution refers both to the physical structure – the parliamentary precinct itself – but also to the idea of parliamentarism as a form of government. The dignified neo-Gothic architecture, thoroughly steeped in history, illustrates the “ancient tradition of ordered liberty” and captures the Christian origins of Westminster parliamentarism far more effectively than any other architectural style. The Gothic Revival during the Victorian era also corresponds to a rejection of republican radicalism and a repudiation of the French Revolution, with which the neo-classical architecture (wrongly, in my view) had become associated. I also admire neo-classical architecture, which the Capitol Building and the Parliament of New Zealand exemplify, but it lacks the magic of neo-Gothicism. Even though the current Centre Block of the Parliament of Canada dates to only 1927, the neo-Gothic style effectively maintains the illusion that Centre Block is as old as the institution of parliament itself. Parliament originated in the Middle Ages – the Christian Age – so naturally it derived important ideas from Christianity. 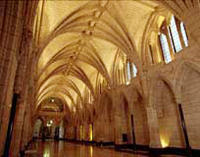 Some scholars have interpreted the tripartite Crown-in-Parliament as the expression of the humanist ideal of a balanced constitution or the institutional embodiment of the “three estates”: the Queen (monarchy), the Senate (aristocracy), and the House of Commons (democracy).[1] Canadian historian William D. Gairdner interpreted the tri-partite Crown-in-Parliament as the institutional representation of “the classical and deeply Christian image of the human being,” which consists of the “Sprit (monarchy), Mind (Senate), and Body (House of Commons).”[2] Perhaps one could also think of the Crown-in-Parliament as the parliamentary equivalent of the Holy Trinity. The Crown-in-Parliament has evolved away from the strictly Christian (and later, exclusively Protestant) foundation and accommodates persons of all faiths, as well as those without faith – particularly in the Commonwealth realms like Canada that do not recognize any faith or sect as an official state religion.

“The Dominion of Canada” and Our Biblical National Motto 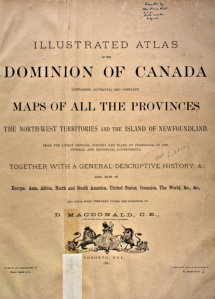 The Coat of Arms of the Dominion of Canada for an old illustrated atlas.

John A. Macdonald first sought to name the result of Confederation “The Kingdom of Canada”, but the British Foreign Secretary vetoed the proposal, fearing that such a name would invite hostility from the American republic.[3] At the London Conference, the Fathers of Confederation and the British government needed to agree on a new name. In the King James version of the Holy Bible, Psalm 72: 8 reads: “And he shall have dominion also from sea to sea, from the rivers unto the ends of the earth.” This passage probably influenced the original choice of name of this country, “The Dominion of Canada.” Canadian historian A.H.U. Colquhoun considers the biblical origins of the “Dominion of Canada” apocryphal (pun intended)[4]. The Department of Canadian Heritage acknowledges that the national motto contained in our coat of arms, Ad mari usque ad mare (“From Sea to Sea”), comes from Psalm 72:8. The ribbon of our coat of arms contains the phrase desiderantes meliorem patriam (“desiring a better country”), which comes from Hebrews 11:16. Given that our national motto comes from Psalm 72:8 and that this same passage also discusses “dominion”, I wouldn’t be surprised if the framers derived the idea of the Dominion of Canada from the Bible as well. Parenthetically, I have only determined that the “Dominion of Canada” fell out of use sometime under Prime Ministers Pearson or Trudeau, though the patriation in 1982 and Parliament’s elimination of “Dominion Day” with “Canada Day” the same year certainly marks its final end.

My area of academic expertise lies in Canadian political institutions, especially the Crown, political executive, and conventions of Responsible Government; since 2011, I have made a valuable contribution to the scholarship by having been published and cited extensively. I’m also a contributing editor to the Dorchester Review and a member of the editorial board of the Journal of Parliamentary and Political Law.
View all posts by J.W.J. Bowden →
This entry was posted in Parliament, Traditions and History and tagged Dominion of Canada, Janet Ajzenstat, John A. Macdonald, Kingdom of Canada, Paul Benoit, Psalm 72:8, William D. Gairdner. Bookmark the permalink.

6 Responses to A Parliamentarist’s Christmas: The Christian Origins of the Westminster System