Collective Parliamentary Privilege Includes The Expulsion of Members of Parliament

As winter’s last gasp of cold air descends on Ottawa, so, too, has speculation over the expulsion of Senator Don Meredith from the upper chamber over his misuse of Senate resources in carrying out an extra-marital affair, which brought the Senate of Canada into disrepute.

Some of my correspondents have informed me that the talk within the Senate of Canada’s administration is that a Senator could only be expelled for one of the reasons listed in section 31 of the Constitution Act, 1867. I believe that this is false.

The grounds for expulsion listed in section 31 as “Disqualifications of Senators” — failing to attend two consecutive sessions of a parliament, becoming a citizen of “a foreign power,” going bankrupt, being convicted of a felony (i.e., an indictable offence in today’s terms) or being attained of treason, or for failing to uphold the residency requirement — are obligatory, but they should not be regarded as an exhaustive list.

The well-established principles of parliamentary privilege mean that any legislative body (i.e., a house of parliament) like the House of Commons or the Senate possesses the authority to discipline or even expel its members. This authority flows from section 18 of the Constitution Act, 1867, section 4 of the Parliament of Canada Act (which itself derives from section 18 of the Constitution Act, 1867), as well as centuries of recognition in the courts and parliamentary precedent and practice.

In the Vaid case, the Supreme Court of Canada defined parliamentary privilege as such: “Parliamentary privilege in the Canadian context is the sum of the privileges, immunities and powers enjoyed by the Senate, the House of Commons and provincial legislative assemblies, and by each member individually, without which they could not discharge their functions.”[1]

Parliamentary privilege applies both to a chamber collectively and to members individually.[2] Ultimately, the individual member’s privilege derives from, and is therefore subordinate to, the collective privilege of the chamber in which he sits.[3] Undoubtedly, one of a legislative body’s collective privileges is the discipline or expulsion of its members.[4]

The case for the expulsion of Senator Meredith could hinge upon his having committed a contempt of parliament rather than having breached a specified privilege, because “a contempt is any conduct which offends the authority or dignity” of the legislative body.[5]

Precedents and Procedure for Expulsion of Members

The Canadian House of Commons has exercised its collective privilege to expel members on four occasions:

Louis Riel holds the singular distinction of having been expelled from the House of Commons twice. After his first expulsion, he ran in the by-election held in his riding, and the voters of Provencher, Manitoba re-elected him. The House of Commons then expelled him for the second and final time. Thomas McGreevy was expelled for having refused summons to the Commons. Fred Rose, a Communist who passed Canadian state secrets to the Soviet Union, was expelled after having been convicted of treason.

The Appendices of the Manual of Official Procedure of the Government of Canada provide the motions that promulgated the expulsions of Louis Riel, Thomas McGreevy, and Fred Rose.[8] 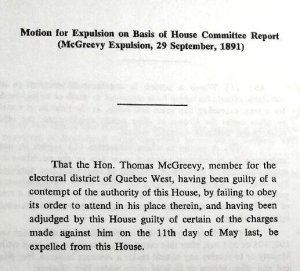 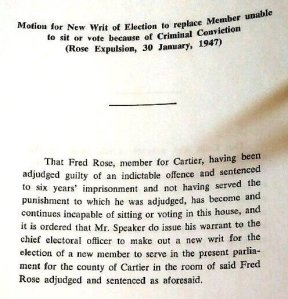 Since Senator Meredith has not even been charged with, let alone convicted of, a criminal offence, the first procedure relative to section 750(1) of the Criminal Code would not apply. The Senate would therefore have to follow the second procedure. Of the four precedents of expulsion from the Commons, the motion to expel Meredith would most resemble that for Thomas McGreevy’s “having been found guilty of a contempt of the authority of this House.” The Senate could substitute “dignity” for “authority” in its motion.

In principle and under under section 18 of the Constitution Act, 1867 and section 4 of the Parliament of Canada Act, the Senate as a legislative body possesses this same collective parliamentary privilege as does the House of Commons. Consequently, neither the House of Commons alone nor the Senate alone could expand their own privileges as legislative bodies; only the Parliament of Canada (i.e, Queen, Senate, Commons) could create new or expand existing privileges through statute, or through a Section 44 Constitutional Amendment, which Parliament can pass alone.[9] (For instance, Parliament could amend section 18 and strike out the bizarre proviso that parliamentary privilege in Canada only exists to the extent that parliamentary privilege existed in the United Kingdom at a certain date on the grounds that this provision is now inconsistent with Canada’s status post-1931 as an independent, sovereign state).

Quite simply, there is no impediment to putting that principle into practice. The Senate’s collective parliamentary privilege as a legislative body allows it to expel its members for reasons other than those listed in section 31 of the Constitution Act, 1867, provided that it follows the proper procedures in accordance with its Standing Orders. If the Senate expelled a member, then his seat would become vacant, and the Prime Minister could advise the Governor General to summon someone else to take his place, pursuant to sections 32 and 24 of the Constitution Act, 1867.

My area of academic expertise lies in Canadian political institutions, especially the Crown, political executive, and conventions of Responsible Government; since 2011, I have made a valuable contribution to the scholarship by having been published and cited extensively in my field. I’m also a contributing editor to the Dorchester Review and a member of the editorial board of the Journal of Parliamentary and Political Law.
View all posts by J.W.J. Bowden →
This entry was posted in Parliamentary Privilege. Bookmark the permalink.