Prime Ministerial succession does not occur automatically and instantaneously under our constitution, but only after a transition of two to three weeks, after the outgoing Prime Minister has tendered his formal resignation to the Governor, and after the Governor has formally appointed the new Prime Minister.

First, the Harper government took office on February 6th, 2006 and not January 23rd.

Second, the Harper government has only served one “term” of office, contrary to the implication in Gill’s reference to “first taking office”. The tenure of the First Minister determines the term in office of his or her Ministry, which means that his or her resignation or death results in the automatic resignation of all other serving Cabinet ministers and the end of that Ministry. A First Minister can serve two or more terms if and only if he resigns from office and the Governor subsequently re-appoints him to that office. In addition, Governments in Canada are not elected, though they are responsible to the electorate. The Governor appoints as First Minister the leader of the party who stands the best chance of heading a government that can command the confidence of the legislature, thus granting him official commission under the Crown – which amounts to the Government’s true legal “mandate.”

Third, Gill is a backbench MP and not a Ministers of the Crown, so he can’t properly describe himself as a member of “the government”! 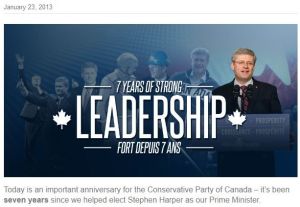 Can you spot the two errors from the Conservative Party’s website?

The results of the election of the 39th Parliament of Canada came in on January 23rd, 2006 and resulted in what would become the second of three consecutive minority Parliaments. In the 38th Parliament (2004-2006), the Liberals held the plurality of seats and Prime Minister Martin’s 27th Ministry continued as a minority government.  Stephen Harper’s Conservatives gained the plurality in the 39th Parliament (2006-2008); upon seeing the results, Prime Minister Martin announced his intention to resign and called upon the Governor General to appoint Conservative leader Stephen Harper as his successor.

However, Prime Minister Martin did not submit his formal resignation until February 5th, 2006,  and Governor General Michaelle Jean did not appoint Stephen Harper as Prime Minister until February 6th, 2006! The dying days of the Martin government, from January 23rd, 2006 to February 6th, 2006, formed the “caretaker period” and provided for the transition from the 27th Ministry to the 28th Ministry. The transition from one government to another generally takes two to three weeks in Canada — it most certainly does not occur instantaneously after the results of the election and party standings become known. In countries where minority parliaments and coalition governments are common, this period of transition also involves a process of government formation, namely, crafting government programs based on backroom negotiations and the platforms of the political parties involved.

The Privy Council Office’s Guide to Ministries Since Confederation shows this clear transition:

1 Response to Conservative Partisans Celebrate the Wrong Date! Transitions Between Ministries in Canada