“Writing the Unwritten: The Officialization of Constitutional Convention in Canada, the United Kingdom, New Zealand, and Australia.” 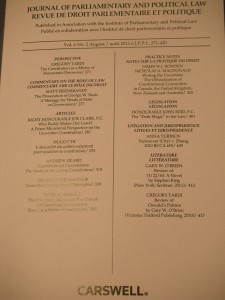 By James W.J. Bowden and Nicholas A. MacDonald

My friend Nick MacDonald and I wrote the last in the series, called “Writing the Unwritten: The Officialization of Constitutional Convention in Canada, the United Kingdom, New Zealand, and Australia.” It describes the following:

This article will examine first the nature of constitutional convention and constitutional principle, and second, examples of officialization of constitutional convention in Canada, the United Kingdom, New Zealand, and Australia. It will focus particularly on the Manual of Official Procedure of the Government of Canada, the British Cabinet Manual and the New Zealand Cabinet Manual. It also describes unsuccessful attempts to codify convention in Canada in 1978 and Australia in 1985. It will conclude that the officialization of constitution conventions into handbooks generally preserves the flexibility of the Westminster system and can serve as educational guidance for the media, parliamentarians, and general public; in contrast, codification would eliminate the politically-enforceable character of convention altogether by converting these political rules into justiciable law.

I’ll post the link to the PDF if or when it becomes available. For now, I’ve uploaded some photos as evidence.

My area of academic expertise lies in Canadian political institutions, especially the Crown, political executive, and conventions of Responsible Government; since 2011, I have made a valuable contribution to the scholarship by having been published and cited extensively in my field. I’m also a contributing editor to the Dorchester Review and a member of the editorial board of the Journal of Parliamentary and Political Law.
View all posts by J.W.J. Bowden →
This entry was posted in Constitution (Conventional), Officialization of Convention and tagged Andrew Heard, Heather MacIvor, Journal of Parliamentary and Political Law, Nicholas A. MacDonald, Peter Russell. Bookmark the permalink.

1 Response to “Writing the Unwritten: The Officialization of Constitutional Convention in Canada, the United Kingdom, New Zealand, and Australia.”