Fareed Zakaria Is Right About Parliamentarism’s Efficiency, but Wrong on How It Works

Earlier I explained why the American form of presidentialism is inherently “irresponsible” (as opposed to responsible government in Westminster parliamentarism) because of its famous separation of powers, which is ultimately the source of all these fractious financial debates over the debt ceiling. Eugene Forsey criticized the separation of powers, based on the quote from Walter Bagehot that I offered in the aforesaid post:

So it ends up that nobody — not the president, not the senators, not the representatives — can be held really responsible for anything done or not done. Everybody concerned can honestly and legitimately say, “Don’t blame me!” 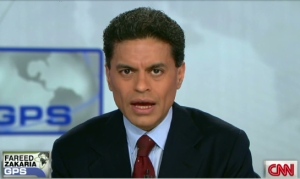 Fareed Zakaria of CNN has picked up on this narrative as well, based on the work of Professor Juan Linz of Yale. He introduced the topic in “Does America Need A Prime Minister?” on August 17th and then followed up on August 21 with “Prime Minister… of America?”  I agree with Zakaria and Linz in principle that parliamentarism produces more efficient and effective government that presidentialism, and that in a parliamentary system, the protracted debate on raising the debt ceiling would simply never happen because either the government would succeed in passing its legislation relatively quickly through parliament, or the House of Commons would withdraw its confidence in the government and force either a change of government or a fresh elections, putting the question to the people directly. Eugene Forsey explains this principle in How Canadians Govern Themselves more eloquently:

In the United States, president and Congress can be locked in fruitless combat for years on end. In Canada, the government and the House of Commons cannot be at odds for more than a few weeks at a time. If they differ on any matter of importance, then, promptly, there is either a new government or a new House of Commons.

I also enjoy the novelty of an American who advocates in favour of parliamentarism. Judging by some of the xenophobic and overtly nationalistic comments on both of Zakaria’s posts, defending this position takes some courage in the United States!

However, in his analysis of parliamentarism, Zakaria made some crucial errors, such as the suggestion that “the executive controls the legislature”. In fact, the exact opposite is true. All parliamentary democracies (Westminster or otherwise) operate on the basic principle of responsible government, which recognizes parliamentary sovereignty by requiring that the government command the confidence of a majority of the House of Commons in order to govern. The government thus derives its legitimate authority to govern from parliament – parliament therefore controls the legislature.

Judging by many of the comments on his blog posts, many Americans unknowingly have a time capsule of 18th-century Britain and George III in mind when they think of parliamentary government, before the entrenchment of responsible government, or an altogether incorrect view that parliamentary systems represent the tyranny of the majority and run roughshod over liberty.

My area of academic expertise lies in Canadian political institutions, especially the Crown, political executive, and conventions of Responsible Government; since 2011, I have made a valuable contribution to the scholarship by having been published and cited extensively in my field. I’m also a contributing editor to the Dorchester Review and a member of the editorial board of the Journal of Parliamentary and Political Law.
View all posts by J.W.J. Bowden →
This entry was posted in Parliamentarism v Presidentialism. Bookmark the permalink.

8 Responses to Fareed Zakaria Is Right About Parliamentarism’s Efficiency, but Wrong on How It Works