On Dual Citizenship and Senators in Canada and Australia 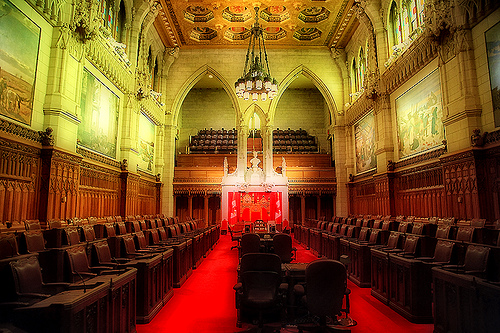 The British North America Act, 1867 and the Commonwealth of Australia Constitution Act, 1901 set up the two first federal self-governing dominions within the British Empire, and they contain numerous similarities, sometimes even identical wording. For instance, section 91 of the BNA Act says, complete with the chronic capitalisation of nouns in the mid-19th century style, that the Parliament of Canada shall “make Laws for the Peace, Order and good Government of Canada.” The Australian constitution uses precisely the same wording (but without the German method of capitalising all nouns) in its equivalent section 51 outlining the heads of legislative power for the federal order of government: the Parliament of Australia shall hold “the power to make laws for the peace, order, and good government of the Commonwealth.” Somehow this standard Colonial Office phrasing “peace, order, and good government”, which made its way into most commissions and letters of instructions to governors and governors general across the Empire for centuries, has become Canada’s national creed and a rebuttal of Jefferson’s “life, liberty, and pursuit of happiness” in the Declaration of Independence. In contrast, our Australian cousins do not seem to give this veritable cliché a second thought and certainly do not elevate it to a national motto.

Australia’s constitution also borrows from Canada’s in the disqualification of members, but with modification.

31.  The Place of a Senator shall become vacant in any of the following Cases:
(1)  If for Two consecutive Sessions of the Parliament he fails to give his Attendance in the Senate:
(2)  If he takes an Oath or makes a Declaration or Acknowledgment of Allegiance, Obedience, or Adherence to a Foreign Power, or does an Act whereby he becomes a Subject or Citizen, or entitled to the Rights or Privileges of a Subject or Citizen, of a Foreign Power:
(3)  If he is adjudged Bankrupt or Insolvent, or applies for the Benefit of any Law relating to Insolvent Debtors, or becomes a public Defaulter:
(4)  If he is attainted of Treason or convicted of Felony or of any infamous Crime:
(5)  If he ceases to be qualified in respect of Property or of Residence; provided, that a Senator shall not be deemed to have ceased to be qualified in respect of Residence by reason only of his residing at the Seat of the Government of Canada while holding an Office under that Government requiring his Presence there.

Section 31(2) therefore automatically disqualifies a sitting Senator if he decides to become a naturalised citizen of another country, “foreign power,” and his seat become vacant. Crucially, however, this provision does not preclude the appointment of a Senator who already possesses another citizenship, whether by birth or by naturalisation, before taking office. During the last federal election campaign, Andrew Coyne wrote a daft column denouncing multiple citizenship, even though Canadian citizenship itself did not exist until 1947 (meaning that millions of Canadians alive today were born as British subjects) and even though one-fifth of Canadians were born abroad and millions more still are born with multiple citizenships automatically. Perhaps he would take comfort in the fact that sitting Senators who become naturalised citizens of another country cease to be Senators.

In contrast, Chapter 1, Part IV, section 44 of Australia’s constitution applies the same standards of disqualification to both Members of the House of Representatives and Senators, perhaps because both houses of parliament were always directly elected by the people. It includes many of the same categories, including on debt and treason.

44 Disqualification
Any person who:
(i) is under any acknowledgment of allegiance, obedience, or adherence to a foreign power, or is a subject or a citizen or entitled to the rights or privileges of a subject or a citizen of a foreign power; or
(ii) is attainted of treason, or has been convicted and is under sentence, or subject to be sentenced, for any offence punishable under the law of the Commonwealth or of a State by imprisonment for one year or longer; or
(iii) is an undischarged bankrupt or insolvent; or
(iv) holds any office of profit under the Crown, or any pension payable during the pleasure of the Crown out of any of the revenues of the Commonwealth; or
(v) has any direct or indirect pecuniary interest in any agreement with the Public Service of the Commonwealth otherwise than as a member and in common with the other members of an incorporated company consisting of more than twenty-five persons;

shall be incapable of being chosen or of sitting as a senator or a member of the House of Representatives.

45 Vacancy on happening of disqualification
If a senator or member of the House of Representatives:
(i) becomes subject to any of the disabilities mentioned in the last preceding section; or
(ii) takes the benefit, whether by assignment, composition, or otherwise, of any law relating to bankrupt or insolvent debtors; or
(iii) directly or indirectly takes or agrees to take any fee or honorarium for services rendered to the Commonwealth, or for services rendered in the Parliament to any person or State;
his place shall thereupon become vacant

The disqualification over multiple citizenship goes much farther in Australia. Unlike Canada’s, which applies only to sitting Senators and to citizenship by naturaliation, Australia’s applies to members of both houses and any candidate running for election and also precludes multiple citizenship by birth. In both the Canadian and Australian cases, the more reasonable interpretation would acknowledge the history of citizenship in the British Empire and exempt, at the very least, the 16 Commonwealth Realms from the category of “foreign power.” Canadian citizenship did not exist until 1947, and Australian citizenship did not exist until 1949. When the Imperial Parliament enacted the British North America Act in 1867 and the Commonwealth of Australia Constitution Act in 1900, all Britons, Canadians, Australians, and New Zealanders shared a common Imperial citizenship as British subjects; the Commonwealth of Australia, by definition, could not have regarded a Canadian or a New Zealander or a Briton as owing allegiance to a “foreign power” because they all fell under the same common power. Australia’s Parliament should have clarified these matters when it created Australian citizenship.

However, the High Court of Australia in Re Canavan [2017] HCA 45 has not adopted this reasonable, purposive, and historical statutory interpretation of section 44(i). More absurdly still, this provision now applies not only to citizenship by naturalisation but even to automatic citizenship by birth. Australian political scientist Malcolm Baalman recounts here how seven members of the Commonwealth Parliament (two senators and five representatives) who held citizenships of both Australia and either Canada, New Zealand, the United Kingdom, or Italy were forced to vacate their seats in 2017-2018. These disqualifications included the Deputy Prime Minister by virtue of his New Zealand citizenship; his departure from the House of Representatives left the Liberal-National government with 75 of 149 seats – thus, in effect, removing their majority.

Global News reported in October 2019 that Canada does not ban parliamentarians from holding multiple citizenship – which is not exactly true. Section 31(2) of the Constitution Act, 1867 prohibits sitting Senators from becoming naturalised citizenships of a “foreign power,” but it would not seem to prohibit persons who already hold another citizenship, whether by birth or by naturalisation, from becoming Senators in the first place. The Constitution Acts remain silent on multiple citizenship and members of the House of Commons, which other statute laws must surely permit expressly or at least do not prohibit. I am not sure if section 31(2) has ever ousted a Senator and caused his seat to become vacant. I suspect not.

My area of academic expertise lies in Canadian political institutions, especially the Crown, political executive, and conventions of Responsible Government; since 2011, I have made a valuable contribution to the scholarship by having been published and cited extensively. I’m also a contributing editor to the Dorchester Review and a member of the editorial board of the Journal of Parliamentary and Political Law.
View all posts by J.W.J. Bowden →
This entry was posted in Commonwealth Realms, Comparative. Bookmark the permalink.